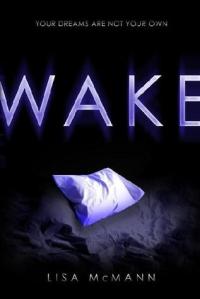 Ugh.  Poorly written YA is such a downer.

Janie is 17 and when people dream near her, she gets pulled in.  She has to watch as they wander around naked, panic and fall, or live out their sexy thoughts.

Of course she’s not going to tell anyone.  She’s learned to physically move away from dreamers or kick them awake, but sometimes she gets pulled in too deep and gets trapped.

And then things get scary.  She is pulled into a terrifying dream and suddenly isn’t just watching but is actually part of it.  She doesn’t know who is dreaming it, she doesn’t know what it means, and she has no clue what she’s supposed to do.

And of course she has normal high school girl drama on top of everything.  The popular kids hate her, her mom is an alcoholic, and her best friend is spending more and more time with her boyfriend.  Janie just wants to get the hell out of town and figure out how to be in college without having a roommate wrecking her sleep.

McMann sets up some amazing problems, and then solves them in the next paragraph.  Maybe the next page.  I hate that.  Let the problems develop, let the characters react, let things happen!  Janie doesn’t seem to react to anything.  How can she not use peoples’ dreams against them?  Even if she’d never in a million years let herself do it, why were there no descriptive moments of the things she’d do and say to the girl who hates her?  Janie knows things about her!  At least think about it!

McMann doesn’t develop her plot points at all.  There were two major moments between Janie and her mom that were set up and then dropped.  She writes a bad sentence about how if Janie had paid attention she might realize something about her mom, but then never comes back to it.  I thought it would eventually show up later, but nope.  In another moment McMann tells us (she doesn’t do a lot of showing) that Janie should have paid attention to something her mom did, but again, she doesn’t come back to it.  What was the point?

Toward the end there is a huge reveal about another character that could change everything about Janie’s life.  It’s gigantic!  Major turning point!  And it’s one sentence long and Janie doesn’t respond to it even a little bit.  There’s no excuse for this type of writing.

The ending and final resolution are obvious and far-fetched.  Everything is sunshine and roses, even though this will be a series.

I was so disappointed.

The potential is here for this to be a solid book, but I don’t know what McMann’s intent was.  Did she feel she had to dumb it down for a YA audience?  Does she not have the skills to write a better book?  What happened?  And who was giving her feedback and let these major plot fouls happen?

Such a disappointment.  And it got nominated for awards!  I’m betting some reluctant readers loved it, so that’s good, but man… let’s get some better writing in here!