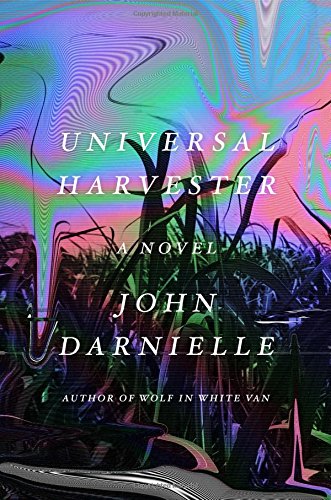 Whaaaaaaaaaaaaaat did I just read and why did I like it?  And why is it called Universal Harvester?  I need this to be a book club book so someone can tell me what they thought was happening and we can hash out the whys.

Darnielle’s writing is breathtaking.  I mean this literally.  There is a sentence with a pronoun shift that made me gasp and I got a sinking feeling in my stomach.  One pronoun scared me.  A PRONOUN.  He has a powerful gift.  There are songs on The Mountain Goats album The Sunset Tree that I cannot listen to because the combination of his words, voice and music almost immediately knocks me into tears and I cannot have that.  His songwriting skills blend beautifully into his fiction and the flow and beats and pauses are just as lyrical.  Wolf in White Van did it to me, too.  I had to pause from time to time to sit with the words.

Adding a confusing as hell plot to such carefully crafted words made this a satisfying read.  I wanted to race through it because what the fucking fuck was happening, but I also want to take my time and enjoy the language.

We’re in Iowa.  Video stores are still a thing and Jonah works at the local Video Hut. Stephanie returns a video and tells him that there’s “something” on it.   A second customer returns a different movie and also tells him that there’s “something” on it.  When Jonah finally watches it and the added scene appears, it scares the hell out of him and gave me a stomach ache.

A barn.  Someone breathing.  Movement under a sack.

What is he seeing?  Was someone hurt?  Is this an art project?  A cry for help?  A threat?  Why is it so terrifying and why isn’t there an explanation?  Should he go to the cops?

Jonah’s boss Sarah Jane watches and becomes obsessed.  She recognizes that barn.  Stephanie also wants to investigate but Jonah wants to be done with everything.  Something is wrong.  It’s unexplainable.  He can’t sleep and he wants to forget what he’s seen.

The book is split by perspectives and time.  The first section is Jonah’s and was by far my favorite.  The mystery is creepy as fuck and Jonah is a strong character.  I enjoyed going through everything with him, even if I didn’t enjoy the content.  (Again, a pronoun shift scared me.)

The second part of the book is a flashback to a new character and mystery and I waited to see how it would catch up to the tapes.  The strength here was not understanding Lisa’s mother’s actions.  It’s a strong choice because Lisa cannot understand what happened, so we shouldn’t be able to either.  And even better, why did this mother’s choice result in someone adding creepy ass footage to VHS rentals?  Where is the logic in a time-consuming, detailed job?

Part three brings us back to Jonah and a reveal that explained nothing to me, and this is where I need a book club because whaaaaaaaaaaaaaaaaaaaaat is going on and whyyyyyyyyyyyyy are these videos being made and whyyyyyyyyy are people participating?  Everything was slow and sad and confusing and I felt like I was going crazy because characters were accepting things as if they were logical.  I couldn’t see the logic and I loved it.

Part four pops us into the future with a whole new cast of characters but the same old tapes.  More is revealed that made me flip back to part three because, again whaaaaaaaaaaaaaaaaaaaaat is going on and whyyyyyyyyyyyyy are these videos being made and whyyyyyyyyy are people participating?  Our future family sees Jonah on one of the tapes and has the same reaction as Jonah did when he first saw a cutscene.  The Pratts don’t know if they should go to the police or shrug it off as an art project.  But it’s creepy as hell and they don’t like it.

It’s still creepy to me because I know who these people are but I still don’t know why they’re participating and what the point to all of this is.  The creator of the films tells us why and states it with calm logic, as if we are foolish to even have to ask.

I did understand why videos were the medium used.  There is permanence to film, both video and photographs.  Visuals were used to both search for answers and send messages, so even though I didn’t get it, I was on board with why it was happening.

This book legitimately stressed me out and Darnielle led me through it all.  I was concerned for the characters and even gave pause to ask if I wanted to know what was happening in that barn.  I was concerned that it was going to be a total brain fuck and maybe I didn’t want to have it in my mind.  (See: Requiem for a Dream)  However, because I am already solidly in love with what Darnielle does, there was no way I was going to put this down.