#32: Autobiography of Red: A Novel in Verse by Anne Carson 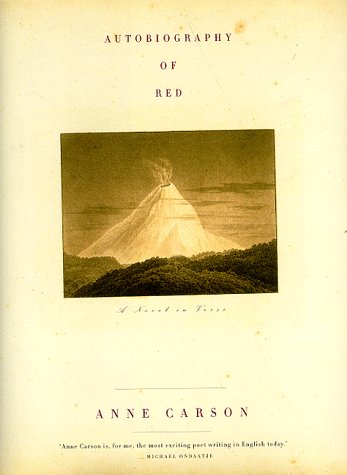 Oh, how I loved this book.  This was another book club pick that I had no prior knowledge of.  I am so glad it was chosen, even if it wasn’t a huge hit with everyone.

I haven’t read a long piece of verse in a while but I love getting back into that brain space.  I’ve got a BA and M.Ed in English, so it doesn’t take me too long to find that sweet spot of feeling the rhythm of the language, not getting distracted by the line breaks, and getting pulled into the story.  For me, it feels like accessing a slightly different part of my brain than when I’m reading normal text.

Geryon is Red.  He’s a monster.  He hides his wings and tries to follow his older brother.  He’s an odd child, monster or not.  He speaks little but is always learning.  His mother is his solace and her unconditional love and guidance helps him find art.  He’s able to create a space for himself while being abused by his brother.  He grows, discovers photography and “somehow Geryon made it to adolescence.”

We know from Stesichoros that Geryon will be killed by Herakles.  He is the tenth labor and has fate is sealed when both are born.

But in this version of Geryon’s life, how will this death happen?  He and Herakles meet as teenagers.  He’s fourteen, Herakles is sixteen and Geryon  is doomed.  He spends as much time with Herakles as he can, wanting to love him completely, but at a complete loss when it comes to approaching the unnamed and unknown.  Herakles is all confidence and sexuality, and yet he seems to wait for Geryon to stumble into admitting something, or waiting for him to simply give up and give in.  Geryon’s longing and frustration is tangible and Herakles’ refusal to help soon starts to feel cruel.

But eventually Herakles possess him completely.  He is charming and only wants to journey and discover and find fun.  When Geryon amuses him, it as if they are the only two in the world.  Geryon feels unworthy and knows this attention is fleeting.  He’s desperate to keep Herakles interested.  He withdraws from his mother, both of them unsure how to approach each other now.

And then Herakles leaves Geryon behind.  He’s bored, or Geryon is boring.  Broken and sick, Geryon peers into his camera and waits.  Perhaps he’ll find something interesting, or become interesting.

Later, Herakles calls to hear his voice.  Geryon feels the love, still as fresh as it was when he was fourteen.  Herakles chatters on about dreams and Geryon is horrified to realize that Herakles doesn’t know him at all, and yet he knows he would still give up everything to be owned by Herakles again.

Years later he’s traveling.  He has his camera.  His wings are strapped tight to his back.  He falls in with scholars.  He listens and learns, like the little boy he was.

A sudden a punch to take the breath from his lungs, Herakles appears.  The two happen to be in the same place at the same time.  Herakles has Ancash now.  The two are traveling around South America.  Ancash is recording the sounds of volcanoes.  The redness Geryon  understands.  He hates Ancash.  He hates himself for drowning in Herakles so quickly.  The three travel together.  Ancash is furious.  Herakles continues to be oblivious and hurtful and wonderful and lovely.  Life is not hard for him.  He is a chosen one.

The three travel.  Geryon takes pictures.  The story’s path is obvious, but what will the ending be?  We know Herakles must kill him.  But how and when and will Geryon embrace him while he dies, or will he finally try to break free?

Geryon flies for Ancash.  He cries for Herakles, or because of him.  Ancash watches Herakles slip away while Geryon knows he’s not going to be the one to tame him.  Neither he or Ancash can keep Herakles.  The two become friends of sort because of this.  Perhaps Herakles will kill Ancash too.

Carson’s verse is red and fire and pain and wistfulness.  Geryon is almost always lost, and it’s heartbreaking because he knows he’s lost.  He is able to find himself in moments behind his camera.  He’s red and he’s surrounded by red and life is red, and he cannot live without Herakles.  Herakles will kill him and he is helpless.

Carson’s writing is beautiful.  The imagery and repetition creates a pacing and rhythm that was satisfying.  At times Geryon pauses and creeps towards his end, but other times there is quick movement, spread wings and soaring moments.  The imagery is skillfully crafted and even though Herakles does not notice, we see every drop of color in Geryon’s world.

I highly recommend this to anyone who enjoys poetry.  Having a retelling of a Greek myth with confusing conversations with Stesichoros the author makes it difficult to walk away from.  Was it truth?  Did he have to rewrite to appease Helen and regain his sight?  When he was blind, did he actually see everything at once?  Which story is the real story?